Saturn-Jupiter Conjunction in Aquarius - The Big Ones ... Control or Expansion 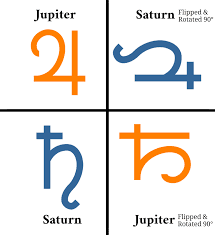 Saturn moved out of Capricorn on the 17th December after almost three years. It floats free between Capricorn and Aquarius until the 26th of December. The well vaunted conjunction of Saturn with Jupiter will take place between 21st December and 24th. Will they be in conflict or will they act in harmony as one whole influence, combining very different strengths to one focus!

On the Winter Solstice (21st) the two giants will be closer than they have been for hundreds of years. The last time they were this close was 1226 and as history is not minutely or even authentically recorded that way back it is difficult to know the effect then. The influence on consciousness and behaviour varies from era to era. And consciousness of the human psyche is everything now, the difference between freedom and control.

Jupiter is expansive, generous, optimistic and full of mercy.  Saturn is restrictive, authoritarian and prohibitive. Saturn wants it controlled and Jupiter just wants it out there!  Does not take a lot to see where the world is reflecting this struggle right now (as above, so below)

The nought degree position of Jupiter and Saturn until the 24th and 26th respectively tend to bring a lack of grip, a lack of cohesion or a distinct feeling of struggle to maintain ground - in situations large and small. Jupiter is the first to grip on the 24th - so the race may start with gusto and with enthusiasm. Which race? : the human race, the race against overwhelming forces attempting to hold dominion over humankind on the planet. Forget viruses, real or fake, who or who is not responsible and all the truth, lies and fairy tales. This is just one effect or ploy used to bring in the massive shift at third dimension which global world policy requires, is hungry for, will stop at nothing to acquire. There will be many more scams, myths and dramas thrown to gain attention, acquiescence and alignment to total dictat.

The dawning of the Age of Aquarius began at the start of 1900 but has dawdled and dwindled, and some may say petered out completely, whilst increasingly bleak and dismal world situations cast shadows against its illumination. But this shift happening now, is the dawning. And the dawning is an individual thing, not yet a universal effect. For sure people pick sides: Brexit, U.S Elections, covid 19, global warming and other extreme beliefs. But the real power lies within, within the way we see our own power or our free will as being crucial, and most fundamentally where we want it to be focused. The freedom of Aquarius is set with caveats. This is Saturn and Jupiter in unison ...at the start of the New Year. Either united or agreeing to differ.

It must be remembered that planetary influences acts within the large and the small ('as above so below') and that individual birth charts make for subtlety and variance of effect in action.

'Shall I stay or shall I go! Shall I prevail or shall I roll over'?  All of this played out in little and larger situations. in group issues, in family matters, in personal dilemmas of all shapes and sizes.

Everything will be in Aquarius in February .... Sun, Mercury, Venus, Jupiter and Saturn. These placements will be squared by Mars/Taurus in conjunction with Uranus (ruler of Aquarius) throughout the month. Many will speak of the real coming of the Age of Aquarius: breakthroughs, breakdowns, transformational stuff big-time. But it is only the beginning, it may take many years before the old and corrupt and the sad and ludicrous begins to fade so that the balanced and the sane begin to take root.

Perhaps, with some fortune or the grace of God, we may see the separating of the lies, truths and myths foisted on humanity by corrupt world leaders and their lackeys. Or perhaps another way of looking at it, is the realisation that what we want to believe is what actually becomes reality. We should decide now before January what sort of world we want to live in, what sort of personal aims and values and settings make this possible, and focus our intentions .... some may call them resolutions.

The shift between this material third dimension and the fifth dimension is at play within all of that is happening. The real tool is consciousness. You cannot move some people from their fear and phobia or their lack of self belief or disconnection to greater source. Whereas others will not be told what to think, what to believe and where they may not go. It is this massive divide in human consciousness that will see the difference, the real shift, in how people go forward after this year.

Posted by Perceptivity Astrology at 04:00