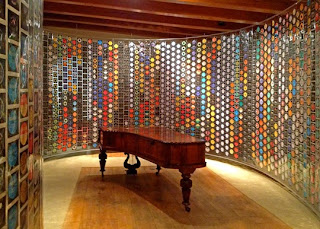 Now that Uranus has finished untangling and shredding the issues of Venus in Aries and the goddess planet has gone into the more luxuriant vibe of Taurus, we see the results of some of the personal frays and wrangles which this influence created.  All may be over bar the shouting, but the dust has yet to settle on this trail laid essentially by the long transit of Venus through the sign since February.

So, headache, and some heartaache, as metals were tested and those of us who are inclined to campaigning or pioneering for new ways or new territory felt ourselves called to arms by sundry causes or situations which have left us either stronger in our convictions or weaker in terms of valuable resources .... possibly both.

Not for the feint hearted, the Uranus/Aries onslaught was aided and abetted by a strong trine from Saturn/Sagittarius which peaked in May and saw old conventions or habits flouted and prominence of priority change, while innovative and untried methods took their place. Whether in our personal life, our communal life or our career, we may still be reeling from twists and turns which left us staggered and uncomprehending. The ways of Venus are subtle, and silent, and often strangely impersonal for such a personal planet. Shedding light on our deepest urges in ways which may chill us or thrill us. Mars joined forces with Venus in February and the battles may have been thrilling or compelling, but had to be ultimately won by stealth as Mars exited the sign in March and left to consolidate in places for further down the time-line. March to May were exhilarating or debilitating as silent or covert campaigns unfolded, or subtle powers prevailed, but ultimately this period will count for much.

The exercise itself was not simply to modify the subject under review - whatever that is for you - but to strengthen our reactions to spontaneous activity and, in many cases, to allow in the previously unthinkable. Clunky changes of gear then on machinery oiling the day-to-day drive of our personal ego systems or the mechanics of our individual infrastructures. The world is changing, to say the least. We cannot think, act or speculate as our forefathers did, in any way shape or form.  We can try but the thing we are trying with or for may wither before our eyes and become as extinct as the dinasaur.  Enterprise, associations, projects, orchestrations or creations ..... and as we are an extension of what we do, we felt ourselves flounder in a malestrom of fluctuating frequency and demand, requiring us to learn new notes and interpretation as fast as we can run alongside the situation or the circumstance itself.

We are manifesting and creating more quickly and more powerfully than ever before in our known history, and some of us wonder where a lot of what we meet has come from and what we have done to deserve it - good or bad!  Our karma is doubly speeded and to think positively and with intent is to evoke pressure to act in response.

The barriers of cause through to long-term effect are quaking.  Maybe there is no long-term effect worthy of our attention for any length of time; every immediate effect takes its own route and makes it to posterity or does not.

Uranus is concerned with transformation and transmutation and transportation.  And it might be true to say that transformation is instantaneous now from the right cause, or it is not happening at all.  To understand 'cause and effect' or the 'Law of Attraction' is to get our heads round this more quickly, but the evidence is there for all to see, within our own lives, and our own issues, however minimal or seemingly inconsequential.  In the bigger issues the speed of happening is unparalleled, and will become more so as the next few years elapse.

The Uranus through Aries vibration is due to end in May of 2018, but February out to May of 2017 saw the inner planets - Mercury, Venus and Mars - bring the hot topics for us all to the top of the agenda. These will be different depending on individual birth charts and need to be recognized, addressed or dignified by deeper understanding when Mars in Cancer squares Uranus in late July so that new scripts of understanding become decipherable and are not lost, thus lending new energetic to more managable sitiuations. Whatever the issues, there will be a crucial or urgent tone to them, even if the ongoing theme has diluted to an undertone that is easier to deal with.

Uranus, traditonally the ruler of Aquarius, has always been responsible for transformation and breakthorugh, notoriously caring little about what it breaks down on the way to new horizons.  We can no longer hold on to what is outwowrn or outgrown and the universe requires dissolution before creation can take place. The speed of this process - creation, maintenance and dissolution might be off the scale, but the possibilities it presents within our development are astounding.

Seasonal Overviews for all signs.
Posted by Perceptivity Astrology at 03:30