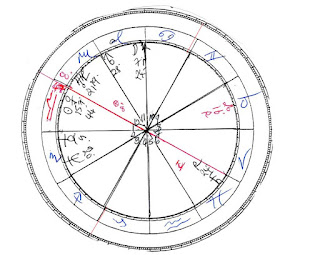 There is some controversy surrounding David Cameron’s time of birth, and therefore about his correct ascendant. The known birth time, which we believe to be correct from reliable sources, is 5.55 a.m. This would give us 0° degrees - 47 minutes into Libra. With a Mid-heaven of 1° Cancer. Whilst It is true that 0° of any sign and 30° of the sign before are so similar that it’s hard to say which should rule, it’s also true that the forty seven minutes into Libra has to be the final stamp - with the caveat that any such cuspal position should give sway a little to the preceding sign, and therefore the traits of Virgo will have a bearing on this man's potential and outlook.

There are perhaps going to be arguments raging about the exact degree of this ascendant within the astrolgical world, but the writer is of the opinion that there can always be an amount of uncertainty about even the most certain of birth times ... clocks stop, run slow, people misread them, forget what they’ve read, and - let’s face it - in the U.K. unless you’re a Caesarian birth or a twin the time is not usually recorded, other than by a parent or onlooker. However, the seal of approval in Mr Cameron’s case is that the Saturn, Pluto square was forming in exact aspect with his angles at the time of the General Election. Saturn moved onto his ascendant in November 09, beefing up in March 2010 and going onto his ascendant at 0° Libra for the last time in August 2010. This aspect, given the square it forms with the planet Pluto, couldn’t be more pertinent from the point of view of someone wishing to be (or destined to be) Prime Minister of England?

Added to which this has now (June 2010) joined a larger T.Square with Uranus in his seventh house squaring up to the Mid heaven at 1° Cancer....unusual arrangements in partnerhips, cutting through historical ties etc, as we come into spring 2011.

But the most dynamic of times for David Cameron could be August 2010 when Venus and Mars join Saturn around that Libran ascendant. This may well be his first major test when it comes to maintaining unity within diversity: the balance his rising sign so loves and the overall designing of his future within a unified and cohesive cabinet.

His Mid-heaven in equal house terms is 1° Cancer in the tenth. He has no planets in his tenth house, but he has three planets in the eleventh. This will provoke a lot of astrologers to say that the birth time of 5.55 a.m. is wrong based on the wisdom that politicians and other positions of public prominence are usually the territory of the tenth house. But what does give greater evidence as to predilection is the Moon in Leo conjuncting Jupiter in his eleventh house of ambition, association and society at large. This might well explain his motivations, psychologically and personally.

These planets in the eleventh house show that he believes in being well connected, and probably subscribes to the old saying that it’s not what you know but who you know. Eleventh house people are often Socialites (not to be confused with Socialists). Or they are given to working within the larger community or their own community.  The Moon/Jupiter combination highlights this value.  The eleventh house Moon/Jupiter is driven to use the energy in terms of popularity and must be seen or heard and respected. People with this combination generally must shine and be remembered for what they do well

The ruler of Libra is Venus and David’s natal Venus is in his first house. Was there a more superb beginning for a politician/diplomat!  His natal sun in Libra forms a wide conjunction to Venus at 15 ° in his first house - a people person if ever there was one!  Maybe a philosopher and possibly a ‘smoothie’ ... but as neither the Sun nor Venus make any particular or pertinent aspect to other natal planets we cannot tell which way they might be used until transits give us a clue as they move through. Time, as they say, will tell.

If we take the square Mercury makes from Scorpio second house to the natal Moon in the eleventh we see a more serious flavour to the personality of that Moon in Leo, in the ability to strategize and raise the game to a more intense level from the often superficial side of both Leo and Libra. This guy is very much Leo/Libra in overall vibrational approach and it will show in his ability to hold the stage, make impact on an audience and be tireless in his public appearance or performance. It’s the energy of high profile, extrovert talent. This conjunction gives the ability to be in the public eye and hold his own in the world amid many different types of people and situations.

On a different note, the natal Pluto/Uranus conjunction in Virgo twelfth house gives rise to power struggles behind the scenes or behind closed doors. Unaspected natally, it more than ever signifies real ‘corridors of power’ stuff.  It will be interesting to observe what might happen when transiting Saturn meets his natal sun at 15° Libra in December 2010, March 2011 and finally September 2011. A three point turn forced by unequivocal situations perhaps! Or the three stages of more definitive position within what must be a shaky dual arrangement at times!  Will this be a deepening of his responsibilities, a widening of his role? Giving him a better hold on matters?  Or will it be an erosion of his confidence by stronger situations and characters. Libra sun is well known for often not being strong in its own convictions, but for being an exemplary light when part of a group. It is said that there is always betrayal or treachery associated with the vibration of Libra, either given or received or both. Think of Marageret Thatcher, another Libran sun, and her last weeks in office.

The Cameron story is set to unfold as Uranus gets a grip on Aries in his seventh house, the house of significant others and partnership arrangements. The planet is not finally in its own power yet, but March next year (2011) changes all that when it enters Aries and goes straightforward. The current Saturn, Pluto, Uranus T.Square will be finished - havin done its work - but the Uranian energies will still be enough to wobble the Cameron collective if things don’t go his way. In September the planet Uranus will retrograde and back up to his natal Saturn in the sixth house - the house of loyalty, vocation, duty and service.......

About that Saturn in the 6th Pisces ....  The Saturn placing here is a singleton and is possibly the weak spot or blind spot of his whole chart. Famous for rendering to us a kind of karmic powerlessness in the face of overwhelming circumstances. And if we then take the natal Neptune in the second house of business and self earned money in sharp aspect to Mars eleventh we see possible a strain on finances in lifestyle or a loss of money or position through excesses of one kind or another. It is wide square but it still applies.

Saturn sixth is about work, health, burdens and everyday schedule.  His natal Saturn is in opposition to natal Uranus twelfth: on the one hand this man is an open book and on the other he is a volume of surprises.  Has he the integrity to lead? Probably!  But the Neptune/Mars square leading from Leo and pulling on Scorpio second house says there can be a fair amount of dissembling or disingenuous behaviour. Of course, there will be the view that this is not only foregivable but necessary in modern politics and despite the hype around cleaning up and being 'above susupicion' only the naive believe that a job at that level can be undertaken without some sort of strong ego and the ability to be expert in the art of ducking and diving - in this day and age of manipulation, hype and heightened communication.  it shuld be borne in mind, while giving a new era and a new arrangement a fighting good chance, that there is no such thing as a perfect vessel.

Posted by Perceptivity Astrology at 06:03